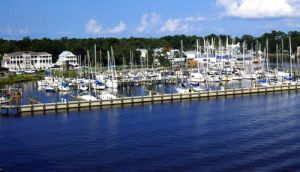 We arrived in the most magical place called Oriental City, North Carolina, anchored in quiet bay in front of the busiest gathering of local elders with hearts so big, we just bathed in its wonder for 2 days.
After a great sleep, an early morning fishing expedition with Bryn and Dylan that fetched a 14 and 17 inch speckled trout, which Phil later filleted and we had for dinner, we returned to find that Phil had moved the boat to a 48 hour free dock and we were front and centre of the heart of Oriental City and all the love it offered.

We were greeted and served up abundant offerings including rides(to grocery stores) by people( Dick, Terry and Pappi) either at the Tiki Bar, just stopping in their cars or walking by. Four fishing pros(Fred, Bill, John and a friendly man that worked at the fishery next to us that saw the children on a floating dock attempting to master “The Pancake Throw”)offered lessons on how to throw (wow it is really an art)a newly acquired bait net and dinner for all at the Tiki Bar.

By late afternoon , I surrendered to any attempts of leaving the dock and exploring with Chantelle as originally planned. We sat on the dock and listened to fellow sailors life stories from musicians , teachers, retired oil employees, lifelong livers on the water to entrepreneurs and more.

Dylan was in his element at the bar diving into the spirits of all the diverse and adventurous souls, capturing their hearts with is genuine curiousity about life. Cheryl, a high school English teacher, gave him her facebook address , commenting that she does not even allow her students on her FB, and wanted to be friends with him.

Chantelle enjoyed a girly manicure at a local spa, practiced bait net throwing and mastered a ring toss (at the Tiki Bar) wrapping a ring around a hook on a tree with the help of the secret tip from a local veteran .
Phil visited marinas, consignment shops and hardware stores for various goodies and I took a quiet bike ride along the waterfront and breathed in spirit of the land, creatures, trees and community.

To learn more about the book, visit: InSearchofMayberry.com!