Hiddenite, NC: “Gem of the Brushies” 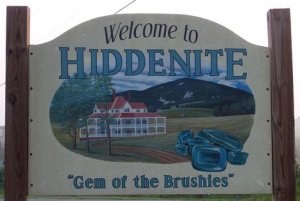 Hiddenite, North Carolina, is located in Alexander County and in a spur of the Blue Ridge Mountains called the Brushy Mountains. For such a small unincorporated town it boasts some unusual history and interesting attractions.

The area used to be called White Plains and, at one time, was a health resort due to it’s sulfur springs. The town was named after William Earl Hidden, a mineralogist sent here by Thomas Edison to look for platinum deposits. Instead of finding platinum he found something more valuable, some emeralds and a rare mineral that was later named hiddenite. Hiddenite is also the town I live in and after living in many places in the United States I wouldn’t have it any other way. Life is slow paced in many small towns and Hiddenite is no exception. The people are friendly, crime rate is very low and most everything you need readily available.

A lot of families and school children come to Hiddenite to visit the Emerald Hollow Mine. The mine is one of just a few where the public can hunt for emeralds, sapphires, and other valuable gem stones. The mine offers much for your families entertainment and has primitive camping facilities, sluicing facilities, a creek, professional gem cutting and lapidary, and a mineral shop in addition to the main mine. For those that would rather camp in better style, or have RVs, there is the HiddeNite Camp Grounds. The camp is located along the South Yadkin River, has 37 full RV hookups, primitive tent sites, large swimming pool and over 30 acres of nature area.